Ah-nold, and that’s Arnold for those of you without a sense of humor, is back and thank you for it! And hand it to him, undergoing a grueling six hour a day, seven day a week physical training regime to, at 68, get in full action movie shape. And he proves he can still throw down with the best of us as he returns to his star-making role in “Terminator Genisys.”
Here he returns to protect both Sarah Conner, Emilia Clarke filling in for Lynda Hamilton, and Kyle Reese, Jai Courtney filling in for Michael Biehn, from Skynet, which was destroyed but hasn’t been yet. But it’s coming so they sent a T-1000 or liquid metal Terminator NOT played by Robert Patrick instead it’s Yung-hun Lee who is not filling in for Robert Patrick, he’s his own guy. But both Arnold and Sarah intercept him, wait are you confused yet…so was I so I’ll stop there. Timeline and story hasn’t been this messed up since Christopher Nolan took us on an amnesiac ride with “Memento.”

But forget that! That’s the only bad news the good news is this; it’s a film that delivers on all cylinders. It’s a great big, fun summertime popcorn movie that reminds us why we love to go to the movies. It’s huge, it’s fast, it’s funny and the action comes and doesn’t stop even paying homage to the prior films at the same time. I mean after all it is more of a reboot than a sequel, in fact you really don’t have to see the prior films, it wants to give us a new world and new look for this world.

Just watch the opening alone which Arnold tries to settle the score with himself by…oh wait just let me stop because it’s a truly fun and funny sequence that sets up the barrage of car chases, shoot outs, fights and high tech commentary that helps to build up to a conclusion that isn’t just satisfying, it makes you crave for more!

And if that isn’t enough good news here’s more British actress Emilia Clarke, Daenerys Targaryen to “Game of Thrones” fans, in an absolute star-making role is a 100%, full-fledged hottie! Looking buff and ready she manages to prove to all the critics and doubters that she is not only an action star but a leading lady ready to take on Hollywood as she fights not one but two killer cyborgs, flips a bus on the Golden Gate Bridge, handles a shoot out in helicopters through the city scape of San Francisco, and even sneaks in a little joke about her height so she can find a way to tell the naysayers “screw you, I’m the star!” Damn right!

So to quote the film “I’m old, not obsolete,” is a great joke for all thinking that both Arnold and the series has gotten too old, and past it’s prime well that’s settled in the first twenty minutes as Arnold himself takes on….WAIT, STOP!! I’m about to spoil yet another bit of fun, oh heck just let me stop, just check it out! They’re already planning another, if it’s as fun as this one they can make 10 more as far as I’m concerned.

This cracks me up because there is no security on this set but the pics have been pretty amazing showing Joker and Harley Quinn but there has always been a rumor that Batman was going to show up and now we have proof and shows that DC is serious about staring up it’s shared universe.  That isn’t Ben Affleck filling out the newest Batsuit, which means Batman will probably stay in the shadows unless Ben sneaks in and films a few scenes.  Director, David Ayer, talked about filming the scenes below.

“I believe in old school filmmaking,” he tweeted “Real stunts. Real people. Real places. It makes all the difference on the screen. Thank you #Toronto.”

I love it when a film takes more practical approach, CGI should only be used to enhance a scene only and it looks like David Ayer’s head is in the right place. 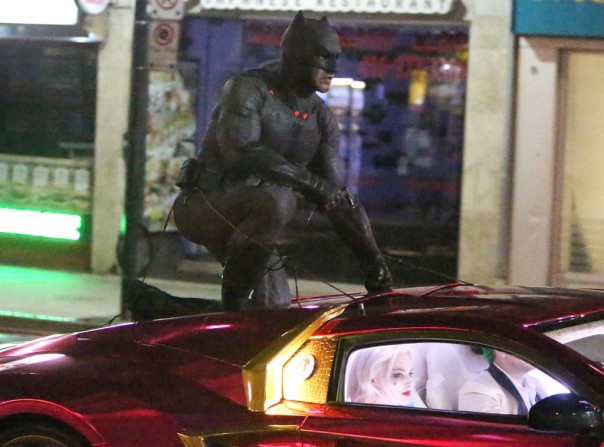 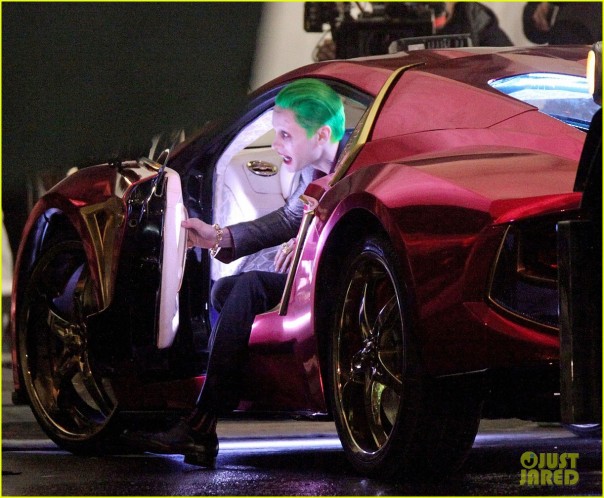 Suicide Squad also stars Will Smith, 46, as Floyd Lawton, aka Deadshot, supermodel Cara Delevingne as Enchantress, Scott Eastwood, 29, as Steve Trevor, How to Get Away With Murder’s Viola Davis, 49, as Amanda Waller, Joel Kinnaman, 35, as Rick Glagg and Australian Insurgent and Terminator: Genisys actor Jai Courtney, 29, as Captain Boomerang.

Batman v Superman: Dawn of Justice is set for release on March 25, 2016 and Suicide Squad hits theaters on Aug. 5 of that year.

I’m still having a hard time believing that Suicide Squad is being made.  When people are starting to wonder if comic book movies are going to become stale WB/DC doesn’t something completely strange and out of the ordinary and decides to make a movie based off their villains in a spy/action setting and staring two of Batman’s most iconic villains The Joker (played by Jared Leto) and Harley Quinn, making her big screen debut by Margot Robbie (The Wolf of Wall Street).

A pic from the set was sent out of Harley pointing a gun at Mr. J’s head but she’s in plain clothes, so is this a flashback?  Is this the ending and she puts him back in jail?  Does she go get him to join the squad?  Perhaps she’s tired of his crap and wants to kill him?

Here we have Leto and Robbie going through a scene with Leto sporting the neon green hair and the much debated tattoos!

We also have a look at The Joker’s pretty sweet looking ride but my question is.  What and how is he able to drive around, anywhere, in a car as nice of this and not have Batman swoop down and beat his senseless?  It’s not like he got out on good behavior.

This is a pretty huge game changer when it comes to comic book movies, this team up, of sorts, can really pave the way for comic book movies to evolve so they don’t become stale.  I’m really interested in how this will turn out and the impact it can have on future comic book movies.  Look for Suicide Squad to hit theaters August 5th, 2016!

Joel Kinnaman to play the part, as he is finished with the final season of the series, The Killing. Joel Kinnaman played Alex Murphy a.k.a. Robocop in the reboot movie in 2014, which received mixed reviews from critics and viewers alike.  Myself, I’m not completely sold on Kinnaman, he was pretty forgettable as Alex Murphy and he’s about an awful an actor as Jai Courtney.  Otherwise, the cast is still pretty strong and I’m still excited to see this.